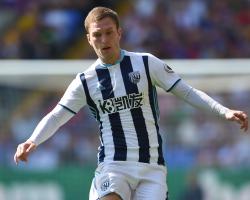 Blues have almost sealed a loan with a view to a permanent move to bring Gardner back to St Andrew's, Press Association Sport understands.

A deal was close last week and negotiations have continued, with the 30-year-old expected to finalise his switch soon.

Gardner, a Blues fan, played for Birmingham between 2010 and 2011 and helped them win the League Cup during his 18 months at the club

Gardner joined on a free transfer from Sunderland and has made 85 appearances, scoring six goals, for Albion

The 26-year-old Slovenia international, who has 30 caps, has also played for Bologna and Cordoba

Blues boss Gianfranco Zola was hopeful of completing a move for Krhin, having been handed ÃÂ£10million to spend in the transfer window.