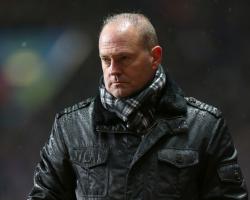 The France Under-21 international joins from Primera Division side Espanyol, who have netted a total fee of almost Â£500,000.

Bifouma represents manager Pepe Mel's first signing since arriving at the club, and helps provide attacking cover following the departure of Shane Long to Hull and with Nicolas Anelka potentially facing a ban over his "quenelle" goal celebration.

A statement on the Espanyol website read: "Thievy Bifouma to join West Bromwich Albion until the end of the season after an agreement was reached with the English club.

Speaking prior to confirmation of the deal, Mel said: "I hope for at least one more player

There are a lot of names but one striker is possible here today.

"But getting Anichebe playing good matches, Saido Berahino is a good player in the front three position and Vydra too.

"Thievy is a young player who scores goals, and he is a possibility."