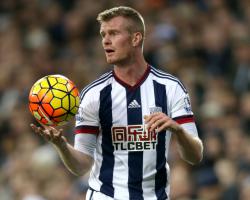 Brunt, who joined the Baggies from Sheffield Wednesday in 2007, has put pen to paper on a deal to keep him at The Hawthorns until the summer of 2018.

The 32-year-old's stay could be extended beyond that for another 12 months should he trigger a clause relating to appearances.

The deal will see Brunt, along with team mate James Morrison, become the first players to spend a decade at West Brom since Daryl Burgess (1987-2001).

Baggies head coach Tony Pulis said: "Chris has been a stalwart of this football club for a long time and he is a valued and popular member of the squad.

"It's great that he has extended his contract and he has shown great character to return from his injury in the manner he has.

"His form has been terrific since returning to the team and long may that continue."

Since his return in October he has been in good form for Pulis' team, scoring three goals and assisting another three.

Brunt has made 331 appearances for West Brom, scoring 45 goals, and h e is the only player since Neil Clement, who retired in 2010, to have made over 300 appearances for the club