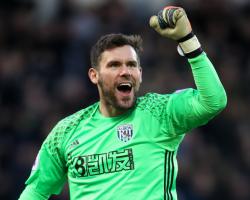 Pulis' team continue to exceed all expectations and remain surprise contenders for European football after beating Bournemouth 2-1 at The Hawthorns on Saturday.

However, it was only possible thanks to a couple of superb injury-time saves from Foster to deny Lys Mousset and then Tyrone Mings

"Ben's made two great saves in injury time, but it's about time he had something to do and do it well for us," joked Pulis

"He's paid a lot of money for doing that

But, in all seriousness, I think Ben would have been disappointed if he'd been beaten by either of those

"We're pleased with him, he's been fantastic for us

This season his performance levels have been absolutely fantastic

"He's brought a lot back to this football club defensively."

Pulis said: "It was a big disappointment Matty couldn't play because the way Bournemouth play, they're a very open and expansive team and that grass they leave behind them, it would have been perfect for him

I was really disappointed he was injured

He'll have another scan on Wednesday to see how it is."

With his team five points above the bottom three, Eddie Howe concedes the Cherries are in a relegation battle, but he is not panicking just yet

" I believe in the players, I am not afraid to face it head on, we are in a relegation battle until the point we are safe," said Howe

"If we come back from this, and I am sure we will, then we will be a much better team for it

"One way for us to get out of this run of form is to work smarter, not to change everything that's good about us

We certainly have to improve, we are giving ourselves too much to do to win games."