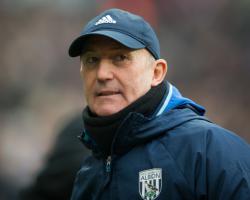 Swansea finish with a win as Llorente sinks West Brom

Llorente's 15th goal of the season - 11 of which have come at the Liberty Stadium - saw Swansea complete a second-half recovery after Jonny Evans had headed West Brom into a 33rd-minute lead.

It was a goal worth two Premier League places, as Swansea capitalised on defeats for Burnley and Watford to rise to 15th in the final standings and earn an extra B#4million in Premier League prize money.

Tony Pulis' side have tailed off badly since reaching the 40-point mark and end the season in 10th spot.

Swansea's players had spent the first part of the week celebrating Premier League survival in Ibiza.

Paul Clement had given his players permission for a two-day break after they had taken 26 points from 18 games since his January appointment, but the trip did not appear to agree with Swansea as West Brom were the sharper of the two sides from kick-off.

Salomon Rondon might have had a hat-trick inside the opening 20 minutes had he brought his shooting boots to south Wales.

Instead Kristoffer Nordfeldt, making his first league appearance since the final day of last season with Lukasz Fabianski given the day off, simply had to field soft finishes.

Swansea looked to their talisman Gylfi Sigurdsson for inspiration and the Iceland playmaker returned Leroy Fer's pass into the path of the Dutchman.

But Fer lashed his angled drive wide and Foster did not have a first-half save to make, with his goal only briefly threatened when Kyle Naughton sent his rising shot over the crossbar.

By then, West Brom were in front as the unattended Evans met Darren Fletcher's far-post corner.

Clement had spoken before kick-off of his pride that Swansea had not conceded a goal under his charge at a set-piece, the only team to achieve that since the turn of the year.

But West Brom are the masters of the set-piece and, with Nordfeldt nowhere as the ball was swung over, Evans headed home his second goal of the season into an unguarded net.

The Baggies should have doubled their lead four minutes after the restart when referee Mike Dean waved play on after Fernandez fell to the ground with Rondon at his back.

Rondon raced on in to the area but the Venezuelan dithered and Leon Britton chased back to block.

Fernandez was shaking his head again moments later, this time in the West Brom penalty area after Fer flicked on Sigurdsson's corner to leave the goal at his mercy.

Somehow, Fernandez guided his header wide as he failed to end his 14-month wait for a goal.

But Swansea were level after 72 minutes when Sigurdsson floated a free-kick to the far post and Llorente nodded down for Ayew to finish in front of goal.

Ayew came close to another when he drove into the side netting, but victory was at hand when Spain striker Llorente showed he is as lethal with his right foot as he is with his head.