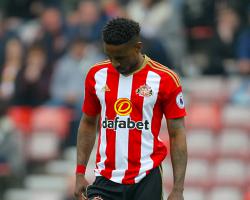 The Sunderland striker will be available, reportedly on a free transfer, after the Black Cats were relegated from the Premier League last weekend

Pulis has gone through the majority of the season with just Hal Robson-Kanu and Salomon Rondon as available strikers with Saido Berahino barely playing, due to a two-month ban for failing an out-of-competition drugs test, before he joined Stoke in January

Defoe, 34, has scored 14 of Sunderland's 26 goals in the Premier League this season and boss David Moyes has confirmed the England international has an escape clause in his contract, with West Brom considering a move

If Jermain's one of them, we'll be pushing on that one if we can

"When Saido left we had Robson-Kanu and Salomon, a free transfer and a player that's only spent one season in the Premier League, so we knew that was an area we had to improve.

We have to try and bring players in who are going to improve the first XI and keep the club improving that way.

That will certainly be one of the areas we're trying to improve."

"He's been offered a contract, again I'm not getting too involved in it," Pulis added

" I'm not sure how far they are but from what I can gather Craig wants to sign and the club want him to sign."

Meanwhile, Matt Phillips and Robson-Kanu (both hamstring) are out of the game at Turf Moor with Albion looking to end a run of five games, which has included four defeats, without scoring

Pulis added: "We might make a few changes, freshen things up and see how we go."