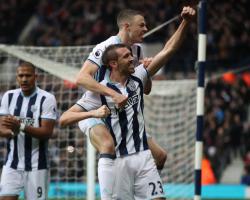 Expected to struggle, the Baggies are flying high in eighth place in the Premier League and seventh spot may bring qualification for next season's Europa League - a position currently occupied by Everton, who are four points ahead of Tony Pulis' team from as many matches.

Bournemouth took an early lead through Josh King's penalty but goals from defenders Craig Dawson and Gareth McAuley turned the game on its head before half-time as West Brom won at home for the seventh time in the last eight outings.

But it was only possible thanks to a superb injury-time save from Ben Foster to deny Tyrone Mings.

An exciting finale to the game followed a breathless beginning

King confidently tucked away the spot-kick into the bottom corner, sending Foster the wrong way.

There was a chance at either end before West Brom equalised, with Chris Brunt sending a shot into the side-netting for the hosts and Foster helping an Adam Smith effort over the crossbar.

Dawson's deflected strike from the edge of the box brought the Baggies level after 10 minutes as the ball flicked off Charlie Daniels and flew into the roof of the net.

It was West Brom's 35th Premier League goal of the season - one more than they managed to score in the whole of the 2015/16 campaign.

Bournemouth goalkeeper Artur Boruc failed to claim a corner, causing a scramble inside the penalty area, and McAuley was on hand to turn the ball in from close range.

It was a nice way for the defender to mark the 500th club appearance of his career but a brave block shortly afterwards to repel a goalbound effort by Jack Wilshere may have pleased him more.

Boruc may have been at fault for West Brom's second goal but he made amends in first-half injury time with a reflex save to repel a Jonny Evans header and keep his team in the match.

Meanwhile, Dawson and Mings had clashed heads inside the penalty area and after receiving treatment the West Brom defender was thankfully able to walk from the pitch - but unable to continue.

Neither side created much of note thereafter, until Bournemouth pushed for an equaliser in injury time

Foster did well to help a 25-yard shot from Lys Mousset over the crossbar before producing a full-stretch save to deny Mings at the death.