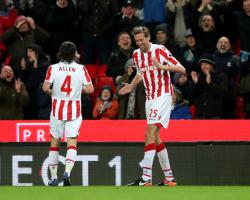 The hosts felt Nacer Chadli's early goal should not have stood and were unhappy one of their own was disallowed - but they appeared to have secured a fourth win with goals from Sofiane Feghouli and Manuel Lanzini.

However, substitute Jonny Evans headed a late equaliser to earn the visitors a Premier League point.

For the third game in succession, West Brom took a sixth minute lead

Amid the hosts' appeals for a foul by Chris Brunt on Feghouli, Chadli took advantage of their lack of focus and static defending to beat Cheikhou Kouyate before calmly finishing between goalkeeper Darren Randolph's legs from close range

Robert Snodgrass threatened when he forced the diving Ben Foster to tip the ball around the far left post - but thereafter their inability to replace the focal point of Carroll was clear.

The influence of Salomon Rondon, as physically imposing as Carroll, demonstrated that further

Teeing up Matt Phillips' header with few options in the 15th minute, the striker was unfortunate not to double their lead when he powerfully struck the crossbar from the edge of the area.

Only two minutes later, Feghouli felt he had equalised - but his effort was instead rightly ruled offside by referee Michael Oliver

Foster had unconvincingly punched another delivery from Snodgrass no further than Lanzini when the midfielder's pass found the Algeria international, whose close-range finish was disallowed with Antonio in an offside position.

The influential Feghouli also dragged a shot wide of the far left post from the edge of the area, and ended a counter-attack led by Antonio because of a heavy touch, before being rewarded for his perseverance in the 63rd minute.

Lanzini aimed towards the top corner and after his curling shot was tipped onto the bar by Foster, Feghouli raced onto the rebound to score from close-range and level the scores.

Lanzini appeared to have secured all three points for the hosts in the 86th minute when he again created space on the edge of the area and curled a shot into the bottom left corner beyond Foster.

However, the visitors earned a final set-piece in the fourth minute of added time - and Brunt brilliantly crossed towards Evans, who headed from the back post inside the far right corner of the net