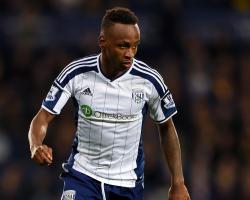 West Brom 0-1 Arsenal: Match Report - view commentary, squad, and statistics of the game as it happened.Welbeck winner for ArsenalDanny Welbeck bagged a crucial winner for Arsenal as the Gunners clinched a comfortable 1-0 win at West Brom.In front of watching England boss Roy Hodgson the striker nodded in to condemn the Baggies to a third straight defeat as the Gunners hit back from last week's defeat to Manchester United.A banner in the visiting fans' stand did still call for boss Arsene Wenger to leave - 'Arsene - thanks for the memories, but it's time to say goodbye' - with Gunners fans still frustrated with their team

It was a routine win though and Ben Foster denied Welbeck and Santi Cazorla in the first half before being beaten.The hosts rarely threatened, although Saido Berahino headed against the bar late on, and they have now failed to score in their last three matches.Berahino has also not netted in his last five outings and did little to impress Hodgson after earning his first international call up this month.The striker started despite the revelations of his arrest for alleged drink driving this week.Youssouf Mulumbu replaced Chris Baird and Sebastien Pocognoli returned for the suspended Claudio Yacob.Arsenal made five changes as Olivier Giroud made his first Arsenal start in three months and the Gunners, without the injured Jack Wilshere after his ankle surgery, recalled Cazorla.Emiliano Martinez started in goal with Wojciech Szczesny out with a pelvis injury.Laurent Koscielny replaced Kieran Gibbs, while Mikel Arteta was ruled out with a calf problem as Mathieu Flamini came in..The Baggies started brightly and, aside from two comfortable saves from Foster to deny Cazorla and Alexis Sanchez, Arsenal struggled to make inroads.Albion, though, failed to test rookie Martinez, despite their possession and the Gunners gradually began to take control.Foster produced a smart save to deny Welbeck from 10-yards on 26 minutes after Aaron Ramsey's slick pass.Soon after the keeper was robbed by Giroud, only for the striker's cross shot to fly across the face of an empty goal.The visitors were guilty of trying to be too precise but were being granted too much space by the Albion midfield as they tried to pick their way through.One slick move did present Cazorla with a chance, after he linked with Giroud and Welbeck, but his shot was easily saved.The organised Baggies remained robust although Mulumbu almost gifted Arsenal an opener when he lost possession to Cazorla and Ramsey shot wide.Despite remaining solid at the back the hosts were a non-entity going forward with Martinez a spectator, even if Berahino had the ball in the net after Chris Brunt was flagged offside just before the break.The Gunners continued where they left off after the re-start and Ramsey sent a volley over.For all their possession, though, patient Arsenal almost took the lead in rustic circumstances on 52 minutes when Foster dropped a free kick and Per Mertesacker fired wide.It was another warning for the Baggies but one they failed to heed when the dominant Gunners finally got their rewards on the hour.Cazorla had already run the Baggies midfield ragged and he left Andre Wisdom trailing on the right to dink a cross for Welbeck to nod in from six yards.It was all the Gunners deserved and they remained in their comfort zone with little to concern them until the final 10 minutes when Albion mounted a muted rally.The previously anonymous Berahino headed against the bar nine minutes from time and Craig Gardner's effort deflected inches wide - but any leveller would have been unjust