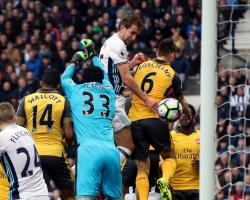 Roberto Firmino's header was enough to earn Liverpool a 1-0 win at West Brom and keep their top-four challenge on track.

Jurgen Klopp's side climbed over Manchester City into third, having played a game more, to strengthen their claim on a Champions League qualification spot.

Despite their struggles, the Baggies began brightly and Hal Robson-Kanu directed Matt Phillips' effort wide but Liverpool gradually took control and nearly went ahead after 15 minutes

The visitors bossed the early stages, although it was Albion who created the best opening when Chadli was left red-faced after 23 minutes

Gareth McAuley found Phillips and he hooked the ball to the far post with Chadli waiting to tap in but the former Tottenham man missed his kick from four yards, having been put off by the slightest of touches from Firmino

Albion sat deep and denied Liverpool space, with their plan working until the Reds broke the monotony to grab the winner seconds before half-time.

Firmino, of all people, lost the ball to Salomon Rondon and he teed-up Phillips only for the winger to be thwarted by the on-rushing Mignolet

And substitute Alberto Moreno should have settled it in stoppage time but, after goalkeeper Ben Foster had come up for a corner and been dispossessed, shot wide of an open goal from 40 yards.