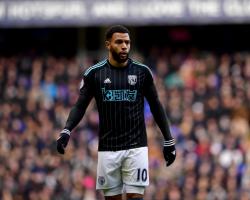 But Claude Puel's side only secured back-to-back wins thanks to goalkeeper Forster, who denied Craig Dawson and Jonny Evans in stoppage time.

In contrast, Albion were condemned to a second straight defeat and they have won just once in their last six games as their attempt to break the 50 points barrier for the first time in the Premier League continues to stutter

Neither side, both comfortably mid-table, were in a rush to make an impact at The Hawthorns and it took until the 20th minute for the first real chance when Forster parried James Morrison's 25-yard drive and Nacer Chadli fired the rebound well over.

The game again drifted for another five minutes until, out of the blue, Clasie won it

Nathan Redmond, Shane Long and Dusan Tadic were all involved as Tadic teed up Clasie to drill just his second goal of the season from the edge of the area

The goal at least triggered a flurry of action as Redmond sent Long through - but the striker stumbled under Evans' challenge, although there was no appeal from the former Baggies striker for a free-kick

It was then Albion's turn to threaten briefly when they finally conjured a chance seven minutes before half-time, only for Forster to palm away Salomon Rondon's looping far post header.

Long then headed wide at the the end of the half and Southampton restarted with greater endeavour with Long, Redmond and Tadic threatening but often failing in the final third

The Baggies huffed and puffed but lacked the invention to level and James McClean's penalty appeals were waved away after he tumbled under pressure from Forster, before Ben Foster saved well from Redmond's snap volley

The Saints, though, clung onto their slender lead as the Baggies pressed but could not find a way through thanks to Forster's match-winning saves in stoppage time

First, Dawson was not tracked as he latched onto Jake Livermore's lofted pass but Forster pulled off a brilliant one-handed reaction stop to beat away the defender's six-yard volley

Then, a minute later, the England goalkeeper turned Evans' late header away to seal victory