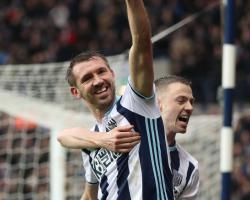 Zaha lit up a poor Premier League encounter at The Hawthorns when he opened the scoring after a neat piece of skill after 55 minutes.

The result lifted Palace out of the bottom three and indicated Sam Allardyce's work is now starting to bear fruit after a frustrating start with the Eagles.

The first half was a disjointed affair with little by way of goalmouth action.

The rainbow which formed over the stadium amid the showers and sunshine was prettier than the game itself, which saw Jonny Evans bandaged around the head after a collision with Jason Puncheon.

Fifteen minutes had gone before either side created an opening and that came and went as a dipping cross from Allan Nyom intended for Salomon Rondon was headed behind by Mamadou Sakho.

The only effort on target of the first half came when Christian Benteke rose to meet a corner but his header was blocked on the line by Chris Brunt.

Brunt had an opportunity himself at the other end but volleyed well over from 20 yards from James Morrison's cross.

As a drab first half drew to a close, Rondon appealed for a penalty and then a free-kick just outside the area after collisions with Yohan Cabaye and Joel Ward but was awarded neither.

After such dull fare, Zaha's strike came out of the blue.

The former Manchester United winger controlled a long crossfield pass from Cabaye on his chest and then lashed home a left-foot shot from a tight angle.

Finally the game began to come to life with Zaha charging into the box again but he lost possession and Puncheon's follow-up attempt was deflected wide.

Palace threatened again when Luka Milivojevic played in Townsend but Ben Foster was quick off his line to block his shot.

The game did revert to its earlier scrappy state for a spell and one of the crowd's biggest cheers of the afternoon came when referee Mike Jones fell over after colliding with Jake Livermore.

The hosts could not find a way back into the game and, as they pushed up in the latter stages, they were caught by Townsend.

He turned Craig Dawson inside out and then beat the slide of Evans to fire home from the left and secure three important points.