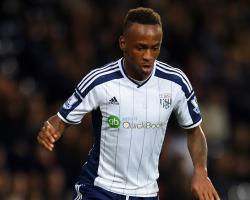 West Brom 0-2 Newcastle: Match Report - view commentary, squad, and statistics of the game as it happened.Perez beauty keeps Magpies flyingAyoze Perez's moment of magic inspired Newcastle to a comfortable 2-0 win at West Brom, their fifth successive victory in all competitions.The striker brilliantly scored a third goal in as many games with a back-heeled flick into the far corner past the helpless Ben Foster as Alan Pardew's Magpies revival continued at the Hawthorns.Fabricio Coloccini's header added the gloss for Newcastle, who have now won their last four Barclays Premier League games.It was Perez's impudence which gave them the platform though, his back-heel flick reminiscent of Kanu's goal for Arsenal at Middlesbrough in 1999.It helped lift the Magpies up to seventh in the league while the poor Baggies dropped to 13th with Saido Berahino, celebrating his first senior England call-up, anonymous.Youssouf Mulumbu replaced the suspended Craig Gardner for the hosts while Victor Anichebe came in for Stephane Sessegnon.Once again B#10million record signing Brown Ideye failed to make the Baggies squad.Perez was rewarded with a start while Papiss Cisse, who had been struggling with a knee injury, was on the bench.With Gabriel Obertan sidelined with a torn thigh muscle and Steven Taylor injured, in came Remy Cabella and Massadio Haidara.The game initially lacked punch until Sammy Ameobi's curling effort bounced off the top of Foster's crossbar in the 10th minute after Craig Dawson's poor header

There were signs of a blossoming partnership between Berahino and Anichebe and they combined again in the 27th minute to present Anichebe with chance, only for Paul Dummett to thwart him on the edge of the box.Anichebe was enjoying the physical battle with the Magpies defence but failed to get the better of Coloccini with the game meandering to the break

But Perez ended the monotony when his wonderful finish fired the visitors ahead just before the break.Newcastle's quick play caught the Baggies out and, when the excellent Daryl Janmaat crossed low, Perez met it with an expert back-heel to divert the ball into the corner across Foster from 12 yards.It was a wonderful moment of skill which was so out of keeping with an otherwise scrappy game.The subdued hosts, with Berahino especially quiet, struggled to respond after the break.While there was plenty of effort the Baggies lacked quality and Newcastle batted Albion's muted attacks away.And the Magpies doubled their lead in the 62nd minute when Coloccini crashed in a far-post header after another devastating right-wing cross from Janmaat.The goal put Newcastle in total control but Andre Wisdom wasted a gift with 11 minutes left when he was left with just Krul to beat after Anichebe pushed the ball into his path.The on-loan Liverpool defender, though, opted to take a touch before sending a wretched shot wide from just six yards.With the wasted chance went Albion's final hope, and Foster prevented further misery when he denied Perez a second, superbly tipping over his close-range effort with four minutes left