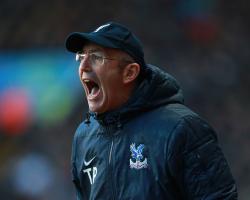 West Brom 0-3 Tottenham Hotspur: Match Report - view commentary, squad, and statistics of the game as it happened.Kane leads the cheers in Spurs winTottenham's Harry Kane further enhanced his growing reputation with two goals in a convincing-looking 3-0 win over West Brom in the Barclays Premier League.The 21-year-old, whose form reportedly has Spurs ready to rip up a contract signed just five months ago to offer an improved one, took his season's tally to 20 after Christian Eriksen opened the scoring at The Hawthorns.Eriksen struck after just six minutes with a trademark free-kick, maintaining his fine recent form for the Capital One Cup finalists

Kane doubled the lead after 15 minutes and grabbed the third from the penalty spot after 66, condemning Tony Pulis to his first defeat at West Brom boss.Between the second and thirds goals, however, West Brom had been the better side and Pulis will have seen plenty to encourage him, despite a low-key debut from new signing Callum McManaman.A touch of razzmatazz was brought to the occasion by a visit from the cheerleaders of the Kansas City Chiefs, who are in the UK on Super Bowl weekend for NFL publicity reasons.The players came out to a guard of honour from the cheerleaders but any sparkle initially seemed lost on West Brom, who started sluggishly.The hosts put up little resistance as Spurs carved through them at will in the early stages, getting their first chance after Mousa Dembele was brought down outside the area by Claudio Yacob.There was little doubt Eriksen would shoot after his stunning set-piece against Sheffield United in midweek and further fuelling his confidence with a late goal in that League Cup semi-final.But Foster still seemed slow to move and could not keep out the in-form Dane's well-struck effort.It was the first goal the Baggies had conceded in three Premier League games since Pulis took charge and they were reeling from another soon after.This time Kane applied the finish after picking up a defence-splitting pass from Dembele

Kane turned inside Andre Wisdom and smashed the ball home before Foster had chance to react.It looked like being a long and sobering afternoon for Pulis but his side responded positively to the double setback.Saido Berahino and Victor Anichebe combined well before Chris Brunt shot straight at Hugo Lloris from long range.That gave Lloris a welcome first taste of the action before he was called upon to tip over a fine effort from James Morrison.Spurs' goalkeeping captain, back in the side after missing their three successive cup games in the past fortnight, then did even better to deny Yacob from close range following an elaborate free-kick routine.Joleon Lescott headed over, Anichebe shot just wide and Craig Dawson went even closer, heading against the bar, as West Brom stepped up the pressure

Morrison also wanted a free-kick for a foul by Danny Rose just outside the area but nothing was given.West Brom could not carry their momentum into the second half and Eriksen went close to scoring his second with a low left-footed drive across goal.Spurs got the chance to increase their lead just after the hour as Lescott slid in to block a cross from Kyle Walker and the ball struck his arm.It was unfortunate for Lescott but referee Kevin Friend clearly felt he had no option other than to award a penalty.Kane was emphatic from the spot, sending Foster the wrong way with a perfect shot just inside the left post.West Brom's response will again at least have pleased Pulis as Anichebe headed over and Berahino drove wide.But Spurs retained the upper hand and Foster denied Kane a hat-trick when he touched over his free-kick