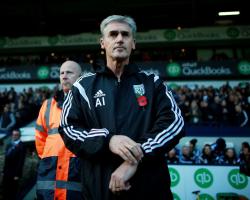 West Brom 1-2 West Ham: Match Report - view commentary, squad, and statistics of the game as it happened.Hammers hit back to beat BaggiesWest Ham hit back to win 2-1 at West Brom and heap more pressure on Baggies boss Alan Irvine.Kevin Nolan and James Tomkins cancelled out Craig Dawson's early opener as the hosts slipped to their fourth straight defeat.The Hammers, though, remain fifth in the Barclays Premier League after another impressive victory.Dawson had become the first Albion player to score in 370 minutes but the Baggies' dream start turned into a nightmare before the break.They had recalled Chris Baird and Victor Anichebe with Sebastien Pocognoli, sidelined with a dead leg, and Youssouf Mulumbu, dropping to the bench.West Ham were without midfielder Mark Noble, who failed to recover from the calf injury he suffered in their 1-0 win over Newcastle

It meant Nolan returned with Winston Reid and Mauro Zarate.The Baggies needed a quick start after their recent slump and they got it after 10 minutes.Anichebe and Graham Dorrans had already gone close before they grabbed the goal their start merited.The former was fouled on the left and Dawson arrived unmarked to crash in Dorrans' free-kick from six yards.The Baggies, so passive in losing to Arsenal on Saturday, seemed to have learned their lessons as they took the game to West Ham, only for their momentum to ebb away.They survived a scramble when Ben Foster saved from Nolan's hooked shot and Cheikhou Kouyate could not force a leveller.It lifted the Hammers after their slow start and they took control and, as against Arsenal, Albion wilted and inevitably conceded on 35 minutes.Referee Mike Jones awarded a free kick after Chris Brunt, who was booked, won the ball from Nolan.Downing's delivery found Tomkins and, when the ball fell to Andy Carroll, his fine acrobatic volley was saved by Foster - only for Nolan to head in from four yards.Worse was to follow, though, in stoppage time as the Hammers deservedly took the lead.Kouyate forced Foster into a smart save but the keeper was beaten from the resulting corner when Tomkins headed in Downing's cross.It was abject defending from the Baggies and underlined the soft underbelly of the squad which requires improvement next month.That the Baggies lost the influential Brunt to injury just before the goal was a double blow but they should have levelled eight minutes after the break.Mulumbu, on for Brunt, chipped up to Joleon Lescott but Dawson could only volley his knock-down wide from 10-yards.It was a golden chance but one which summed up the hosts' waning confidence.Adrian got down smartly to save Anichebe's fierce angled drive with 27 minutes left but the hosts lacked sparkle.Substitute Silvestre Varela tried to add the missing creativity and his cross saw Anichebe head weakly at Adrian.The lack of cutting edge had Albion fans calling for record signing Brown Ideye and he was thrown on as the hosts tried to rescue the game in the final 10 minutes.It lifted the Baggies and Anichebe continued his duel with Adrian when he turned only for the keeper to save his sharp six-yard effort.And with four minutes left Dorrans sent a volley inches wide but with that missed chance went Albion's hopes of a recovery