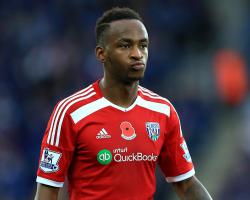 West Brom 1-3 Man City: Match Report - view commentary, squad, and statistics of the game as it happened.Convincing win for Man CityChampions Manchester City again made light of the absence of strikers as they cruised to a 3-1 win at West Brom.Fernando, Yaya Toure and David Silva did the damage in the first half at The Hawthorns, scoring inside the opening 34 minutes, as City kept up the pressure on Barclays Premier League leaders Chelsea.Snow made conditions difficult in the second half and West Brom earned reward for showing some late spirit as they scrambled an 87th-minute consolation from a corner, Brown Ideye getting the final touch.The scrappy end - albeit mitigated by the weather - took the gloss off an otherwise impressive display by City, who raced out of the blocks and led after just eight minutes.Their victory was their ninth in succession in all competitions, equalling a club record and was the perfect response to Chelsea's defeat of West Ham earlier in the day.It was also all the more impressive coming without forwards Sergio Aguero, Edin Dzeko and Stevan Jovetic and captain Vincent Kompany.Jovetic did make the bench after overcoming a hamstring injury but was not needed as makeshift centre-forward James Milner and the impressive Silva, operating behind him, led the attack.City needed little time to get into their stride and stretched the hosts early as Silva and Jesus Navas burst forward

Bacary Sagna delivered a dangerous cross but West Brom managed to scramble clear from the feet of Silva and Milner.The respite did not last long as City attacked again with Navas finding space in the area

His deflected cross should have been claimed by Ben Foster but the England goalkeeper fumbled and Fernando acrobatically hooked in from close range.The damage soon got worse for West Brom as Silva skipped into the area and was adjudged to have been fouled by former team-mate Joleon Lescott.Toure stepped up to rifle home the penalty with just 13 minutes gone and City began to look rampant, with Navas darting through and shooting at Foster soon after.West Brom showed some spirit as the recalled Saido Berahino drove across goal but City went close again as Silva fired over after a good move.Samir Nasri twice needed treatment, first for a head injury after being caught between Lescott and Gareth McAuley, and then for a leg problem after a strong challenge by Mulumbu.City were hardly disrupted and went 3-0 up as Fernando seized possession and drove forward to release the ever-threatening Navas

Navas almost casually picked out Silva on the edge of the area and he finished with a superb first-time shot just into the far bottom corner.That finally seemed to spark West Brom into life as Craig Gardner tested Joe Hart and Berahino again shot wide.It came too late to prevent them being booed off by the home fans at half-time but they carried some momentum into the second period.For a spell the Baggies dictated the play and they almost earned reward when Silvestre Varela slid in to meet a Gardner cross at the back post but diverted the ball wide.James Morrison troubled Hart with a fizzing low shot from distance which the England number one clutched only at the second attempt.As the snow began to thicken and settle, City switched their focus to seeing out the game.Silva, perhaps also as a precaution after an earlier knock, was replaced just after the hour by defender Aleksandar Kolarov.West Brom went close to replying as Lescott headed over and Stephane Sessegnon shot across goal.They finally got on the scoresheet as Hart missed a corner and the ball rebounded in off the back of Ideye's head

It was highly fortuitous, but the Nigerian had at least opened his Premier League account.City saw out the rest of the game with little alarm and Milner celebrated by throwing his shirt to the away fans