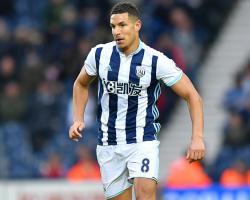 The defender and substitute Hal Robson-Kanu, who scored just 75 seconds after coming on, inflicted a sixth loss on the beleaguered Wenger in his last nine games

Alexis Sanchez's 18th Premier League goal of the season had cancelled out Dawson's opener but the Gunners remain five points adrift of the top four with their hopes of Champions League qualification in the balance.

Off the pitch, Arsenal fans' civil war continued as two planes with the opposing banners 'In Arsene We Trust #respectaw' and 'No Contract #wengerout' flew over The Hawthorns

The manager, out of contract in the summer, remains a divisive figure and came under fire from the travelling fans who called for his exit, unfurled several 'Wenger Out' banners and criticised his late substitution of Sanchez

For the Baggies, they equalled last season's points tally of 43, and recovered from successive defeats to keep their Europa League hopes alive

And they deserved the victory from the moment when Dawson headed them in front after 12 minutes.

Albion had scored 16 goals from set-pieces this season, more than any team in the Premier League, and made it 17 when Dawson rose above Laurent Koscielny and glanced in Nacer Chadli's corner

With Jonny Evans outstanding at the back, the hosts held firm and Cech was the busier of the two goalkeepers before his premature exit.

The delay killed the game - despite McClean receiving a caution for a rash tackle on Sanchez - and it drifted to the break with little action.

Despite all of Arsenal's possession, the hosts looked the most dangerous against the Gunners' fragile backline and Salomon Rondon headed wide six minutes after the break

And the Baggies did regain the lead after 55 minutes through Robson-Kanu's second touch after he replaced Rondon, now without a goal since December 14.

Again, the Gunners defence were at fault when Ospina came to collect a cross, clattered into Bellerin and the ball fell to Robson-Kanu to prod in

Arsenal complained McClean, who was behind Bellerin and then stepped over the ball as it rolled in, was offside but the goal stood

This time, the Gunners failed to hit back instantly but the previously anonymous Danny Welbeck did smack the bar after 65 minutes as Albion were momentarily breached

Chadli's drive was then cleared off the line by Shkodran Mustafi after Robson-Kanu caused more problems, before the Baggies wrapped up the victory with 15 minutes left

There was no coming back for the Gunners and Wenger was subjected to chants of 'you don't know what you're doing' when Sanchez was replaced by Alex Iwobi - with several 'Wenger Out' banners visible at the end.