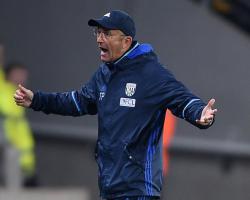 Salomon Rondon's quickfire hat-trick maintained West Brom's unlikely European charge as he inspired the Baggies to a 3-1 win over Swansea.

Three headers sunk Swansea and Tony Pulis' side have now won four of their last six games and, although Pulis refuses to discuss Europe, it remains a growing possibility.

In contrast, defeat left Bob Bradley's Swansea three points from safety and fellow strugglers Middlesbrough, who they travel to on Saturday

They have just one point from their last seven league away games despite Wayne Routledge's late consolation.

There was little to hint at Rondon's goal rush during a dour first half which took an age to ignite even if Swansea almost fell behind after 16 minutes when Matt Phillips fired wide.

Albion, who have now scored 10 goals in their last three home games, looked to Nacer Chadli for inspiration but often came up short as the Swans had the bulk of possession, even if they failed to do anything with it

The rampaging Allan Nyom and Chadli combined to send Rondon clear but, with just Fabianski to beat, he shot too close to the goalkeeper

First, after 50 minutes, Chadli was fouled just outside the area and Phillips delivered a teasing free-kick for Rondon to power in a header from six yards

And, just two minutes later, he grabbed a third with another header which looped over Fabianski from 10 yards

It was game over but Routledge netted a consolation when he fired in with 12 minutes left after Ben Foster saved from Borja Baston.