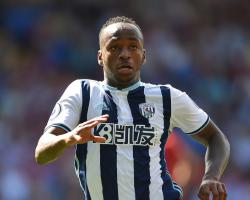 West Brom blitzed Burnley with three first-half goals before going on to equal their biggest ever victory under Tony Pulis.

The Baggies beat West Ham 4-0 in February 2015, the month after Pulis' arrival as head coach, and they repeated the feat on Monday night to climb up to ninth place in the Premier League table.

Matt Phillips struck after only four minutes and when James Morrison doubled the lead with 16 minutes on the clock it was clear that Sean Dyche's 50th Premier League match as Burnley boss would be one to remember for all the wrong reasons.

Darren Fletcher effectively ensured all three points and successive league wins for West Brom for the first time since the turn of the year with a third goal just before half-time.

Salomon Rondon got the goal his performance deserved in the second half to complete the rout and Pulis could even afford the luxury of taking off the Venezuela international with 12 minutes remaining to give him extra rest ahead of the trip to Hull at the weekend.

West Brom, unchanged after winning at champions Leicester prior to the international break, made the perfect start.

Dean Marney tried to cut out a low Morrison cross into the penalty area, but poked the ball straight to Phillips on the edge of the six-yard box and he was able to turn away from Ben Mee and find the yard of space he needed to fire a rising shot into the roof of the net.

Immediately afterwards Tom Heaton, one of two England goalkeepers on duty with Ben Foster in opposition, smothered a volley from Chris Brunt as the hosts piled on the pressure during the opening stages.

However, Burnley might have equalised after 13 minutes following a well-worked free-kick routine.

Steven Defour's cross to the edge of the box was helped on by Mee towards the penalty spot, where Sam Vokes headed the ball down for Jeff Hendrick, but the Clarets' record signing lifted his finish wide.

A Burnley attack was broken up on the edge of his own area by Brunt, who then played a long pass forward to the feet of Rondon just inside the Burnley half

The Venezuela international laid the ball off for Morrison and he advanced goalwards before stroking a shot into the bottom corner of the net from 18 yards.

It should have been 3-0 when Heaton inexplicably gave the ball away to Morrison, but he lost his balance and scuffed his shot wide under pressure from Hendrick.

Rondon was a handful for the Burnley back four and had two chances either side of the half-hour mark to deservedly get his name on the scores sheet.

First he powered an effort narrowly over the crossbar from the left side of the area and then forced Heaton into a superb fingertip save with a curling effort which was headed for the top corner of the net.

West Brom did get their third goal after 37 minutes

Good wing play from Phillips saw him get past right-back Matt Lowton inside the area and stand up a cross to the far post, where Fletcher tapped the ball in from three yards out.

Gareth McAuley nearly marked his 100th Premier League appearance for the club with a goal but his header went wide.

Rondon extended the lead after 64 minutes when he controlled Allan Nyom's cut back and shot on the turn, with the ball taking a slight knick off a Burnley defender en route into the net.

Foster, largely a spectator in the cold and rain, had his palms warmed by a Johann Berg Gudmundsson effort which he gathered at the second attempt before having to help a free-kick from the Icelander over the crossbar.