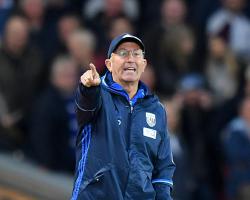 It was business as usual for West Brom head coach Tony Pulis as his side continued their improved form with a 3-1 victory over Watford to climb up to sixth place in the Premier League.

The 58-year-old must also pay costs and interest on the fine which comes from him walking out on the Eagles in 2014.

An expensive week might have felt even more costly had Watford repeated their win at The Hawthorns in last season's corresponding fixture but first-half strikes from Jonny Evans and Chris Brunt gave West Brom a cushion.

Christian Kabasele halved the deficit on the hour mark but Watford never really looked like snatching a point, and their cause was hindered further when Roberto Pereyra was sent off with six minutes remaining.

Ben Foster, a former Watford loanee, made a decent early save to tip Nordin Amrabat's shot over the crossbar after two minutes before West Brom took the lead.

Evans jumped highest inside the six-yard box to head his team in front from a Chris Brunt corner after 16 minutes.

The hosts nearly scored again shortly afterwards when Allan Nyom's cross from the left found Salomon Rondon at the far post but he was unable to guide his header into the top corner of the net and the ball drifted wide.

Watford would probably have been level had Amrabat's rising shot not struck Stefano Okaka on the edge of the six-yard box, with the midfielder's efforts seemingly curling away from Foster and inside the post.

West Brom went 2-0 ahead after 34 minutes when Brunt's long-range strike from a well-worked free-kick struck Juan Zuniga and the ball rolled into the net.

Gareth McAuley might have added a third goal before the break but the unmarked defender headed the ball over the crossbar from a corner, while the other side of the break saw James Morrison go close with a half-volley from Brunt's cross.

At the other end, McAuley made a brave block to deny Troy Deeney.

Jose Holebas made a block at the far post to deny Brunt a certain goal from Phillips' cross and it proved vital as Watford were right back in the match after an hour.

However, from the resulting corner Kabasele equalised from close range West Brom failed to clear the ball.

Foster then reacted quickly to beat Pereyra to a loose ball before the Argentinian was shown a red card for reacting to a challenge from James McClean, who escaped with just a yellow card following a confrontation and skirmish involving players from both sides.

Phillips allayed any nerves with a 20-yard finish in injury time as West Brom won for the third time in four Premier League matches and climbed up to sixth in the table.