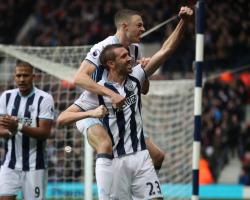 West Brom did not hit that target until the start of April last season.

Instead, they continue to exceed all expectations and remain surprise contenders for European football after beating Bournemouth 2-1 at The Hawthorns.

Albion are flying high in eighth place in the table and seventh spot may bring qualification for next season's Europa League - a position currently occupied by Everton, who are four points ahead of Pulis' side.

The Welshman would not be drawn on talk of Europe, but demanded his players maintain the high standards they have set this campaign, although he would like his team to be more ruthless.

"I don't think we'll have to be looking over our shoulder

"We scored two good goals and responded well to going behind early, but the disappointing thing is, and I know they had a couple of late chances and Ben (Foster) has had to make a couple of good saves, the game should have been out of their reach.

"We should have scored a third goal during that time when we were on top."

Bournemouth took a fifth-minute lead through Josh King's penalty, but goals from defenders Craig Dawson and Gareth McAuley turned the game on its head before half-time.

James Morrison, Jonny Evans and Nacer Chadli, whose header was ruled out for offside, all had opportunities either side of half-time to extend West Brom's lead and they would have been made to pay had Foster not produced a couple of fine saves in injury time to deny Lys Mousset and then Tyrone Mings.

However, Pulis allayed any worries about his well being.

"He's got absolutely slaughtered in the dressing room, it's a little bump on the side of his head," he said

Cherries boss Eddie Howe thought his team were unfortunate, saying: "I felt we did enough to get a point during the course of the game

"We dominated possession, although perhaps we didn't do enough with it

West Brom are a tough side to break down, especially when they are in front

If we'd done that then perhaps the game would have goner much more the way we wanted it to."