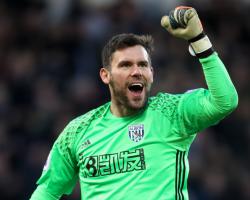 The goalkeeper, who conceded goals to Sofiane Feghouli and Manuel Lanzini during Saturday's 2-2 draw at West Ham, has been a consistent figure in a team that so far this season has performed unexpectedly well.

Gareth McAuley's late equalising goal - after Nacer Chadli had given them the lead - left them eighth with a total of 37 points from 25 league fixtures, and on course to surpass the 47 and 49 they respectively earned in 2012 and 2013.

There had been speculation surrounding Tony Pulis' future at the start of the season after their takeover by a Chinese investment group but they have since impressed, and Foster told West Brom's official website: "The target now for us is 50 points and a top-half finish.

"That would be a very good season for us.

"We'd like to get to 40 points as soon as possible

Hosts West Ham had impressed with their perseverance, despite the absence through injury of Andy Carroll, in recovering from a goal down to get into a winning position in a match in which they felt numerous refereeing decisions went against them.

West Ham also felt McAuley's header should not have stood in the belief a foul had been committed in the goal's build-up.

January signing Robert Snodgrass told the club's official website: "It's obviously a devastating way to lose a goal, so late on, but that's part and parcel of football.

"The lads did feel as though there was a foul in there for the goal, so that's frustrating.

"But some you get and some you don't and we'll pick ourselves up and go again."