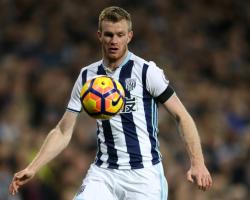 Brunt scored the equaliser as the hosts came from behind to record their sixth victory in their last 10 Premier League games, leaving them eighth in the table

Tony Pulis' side have 29 points, their second highest total after 20 Premier League games, but Brunt warned they cannot allow themselves to lose focus

The few seasons I've been here you never know what's going to happen in the second half of the season," the winger told the club website

It's probably a lot more than in previous seasons

It's important we don't get carried away.

"It's been a tough period for us but the games we've looked at and targeted to get points out of we have."

"We shot ourselves in the foot and that's been the story of our last six or seven games," he said, speaking to the club's official site

"We're trying to stay as positive as we can

When you lose it's never easy and confidence can be shot

You lose games but you dust yourself down and try to put it right."