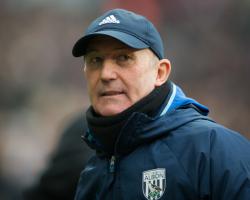 The Baggies chief expects the top six to pull away by spending heavily to widen the gap to the rest of the clubs.

Albion have sealed a top-10 finish in the Premier League - the first time Pulis has achieved that feat in his management career - having been in European contention until March.

But, ahead of Sunday's finale at Swansea, they have slumped to six defeats in their last eight games and missed the chance to set a club-record points total in the Premier League.

They sit ninth, 16 points behind seventh-placed Everton, and Pulis is eager to see what happens in the summer transfer market.

"I would really like to see, and I'll do it when the season has finished, the points the top clubs have taken off the so-called lower clubs this year compared to last year," he said.

"I think all the top sides have got stronger in the summer and they have really taken everything by the scruff of the neck in respect of playing the so-called smaller teams.

"I'm convinced, because the top four is getting really competitive, that the top six or seven will spend enormous amounts of money next year to enable them to get in the top four.

"I'm convinced that's what will happen and I think they will push on."

Albion lost 3-1 at Manchester City on Tuesday and their last victory was against Arsenal in March, but defender Allan Nyom wants to finish on a high

"We were disappointed to lose against a very good Manchester City side," Nyon told the club's website

"We will keep fighting until the end of the season

We are looking forward to finishing on a high against Swansea."