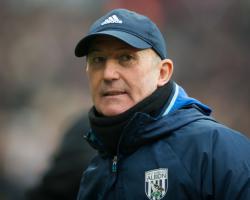 The Baggies were flirting with relegation when Pulis was appointed boss in January 2015 and are now battling to finish eighth this term, ahead of last year's champions Leicester.

West Brom lost 1-0 as Chelsea won the title on Friday night and complete the campaign with trips to Manchester City on Tuesday and Swansea on May 21.

"It was a slow start to the season

"What we've got to do now is try to get something out of these next two away games.

"The club has got a buzz about it it hasn't had for a long, long time.

"There's much more root of optimism, that this club hasn't had since I've been here.

"People want to feel that, get near it and be part of it.

"I'm hoping we can get maybe one or two players in that can give us that lift again for next season, because it's important."

Pulis praised his players and Albion supporters for testing Chelsea, who had to dig deep before Michy Batshuayi's winner eight minutes from time.

"The whole place was rocking

It was a wonderful night," Pulis added.

"We're disappointed we didn't get something out of the last (home) game of the season and it would have been deserved if we had done that.

"It's that little bit of quality we need and we want and we will be looking to bring in for next year."