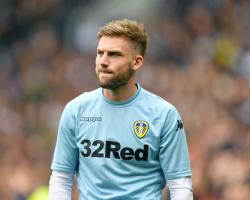 Baggies boss Tony Pulis does not want to take the risk of going to a tribunal for the 23-year-old left-back, who is out of contract at Elland Road this summer.

Taylor has been with Leeds since the age of nine.

West Brom want to negotiate a fee with Leeds to avoid the possibility of an unexpected bill down the line and it has been reported that they have offered ÃÂ£3.5million for the player.

Liverpool were ordered to pay Burnley ÃÂ£6.5million rising to a potential ÃÂ£8million after they took Danny Ings on a free transfer from Burnley in the summer of 2015.

Pulis said: "We wanted to find out what the price was to see if we'd be interested

If it's going to go to tribunal, we don't know what the price is and I think that takes us out of the game.

It's a risk that, at this moment, is not worth taking."

Pep Guardiola is set to end his first season in England without a trophy and can only finish as high as third in the Premier League table.

Champions League qualification was arguably the bare minimum requirement this season but Pulis thinks any criticism of the former Barcelona and Bayern Munich manager is unfair.

"It takes time for a manager to settle in and get what he wants, you can't do it in one season or two transfer windows," said Pulis, who has been nominated for the manager of the season award alongside Antonio Conte, whose Chelsea team clinched the title against West Brom on Friday night, Tottenham's Mauricio Pochettino, Paul Clement (Swansea), Eddie Howe (Bournemouth) and Sean Dyche (Burnley).

" So after one season it's difficult to judge and I'm sure Pep will be determined to be closer next season - in all the tournaments.

"Every club is run different and every club you pick up is in a different state, and I can't talk about other club's situations

Perhaps Pep felt he couldn't develop that group into what he wants and he wants other people in to do it and get exactly what he wants."