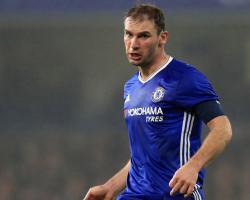 With the transfer window set to close on Tuesday night, Pulis implied the arrival of Jake Livermore, for a reported ÃÂ£10million, will remain the only spending West Brom do, despite also selling Saido Berahino to Stoke for a fee understood to be worth at least ÃÂ£12million to the club.

However, Pulis hinted that he may try to get some players in on loan ahead of the 11pm deadline.

"Ivanovic? That's a definite no, he's not been on the radar," said Pulis

I can't see us spending any more money."

West Brom are looking for a striker to replace Berahino and were interested in Wilson, who has scored six Premier League goals this season, but Pulis has been told the 24-year-old is not for sale during January

"Callum Wilson? I've been told he might be available

I rang the manager up, spoke to Eddie (Howe) directly, and was told no and I've not pursued it since so that's not going to happen."

Meanwhile, West Brom travel to Middlesbrough on Tuesday night looking to maintain their recent improvement that has seen them emerge as surprise contenders for European football next season.

The Baggies are eighth in the table, four points behind Everton above them and four points above Stoke in ninth place.

After an impressive first half of the season, Pulis is looking to guard against complacency and push on again to the end of the campaign - starting at the Riverside.

"It's always tough having a game in the north-east

The supporters are fanatical and make it very hard for you," said the Welshman.

"What we need to do is maintain our standards

Certain people might get complacent and you don't want that

It will be difficult on Tuesday, Middlesbrough are a good team, especially at home."